One of my favorite “every day” type restaurants downtown is Taqueria Mercado. They have good food at good prices and their house margarita actually tastes like an adult beverage. The beer selection is fine and the tequila selection is surprisingly varied. When you get food, they put three house sauces on your table: Green (tomatillo), red (medium spice) and red (spicy), each with their own personality, and each making rice and beans better than they have a right to be. I could eat the carnitas enchiladas with green sauce everyday. Sometimes, it seems I am eating it everyday.

The place is my kitchen away from home, in part because it’s located across the street from my office away from home (aka the library) and next door to my gym which makes Taqueria Mercado officially part of the cool-down portion of my exercise program.

Like a lot of Mexican restaurants, one of the hidden gems on the menu is the soup, like TM’s Sopa de Pollo, a very filling chicken and rice soup that is a staple of my December-February dining. I turned to Sopa de Pollo after the sad exclusion of Birria de Chivo (goat soup) from the menu.

Oh yes, goat soup how I long for thee.

Goat soup is a traditional dish in parts of Mexico that appears on a very small number of Mexican restaurant menus, at least in the midwest. But, for a short time, TM served goat soup regularly, as well as goat tacos and enchiladas. Goat meat looks like, and pretty much tastes like beef, but a little stronger. A long braise in the chili-based broth mellows the flavor and tenderizes the meat.

A bowl of the soup comes with a plate of chopped onions and cilantro, some lime pieces and some small super hot peppers for garnish, plus tortillas. I kind of like crushed tortilla chips in the soup, but the tortilla “wraps” are great to pull out a hunk of meat and eat it like a taco. The broth is rich and spicy, the color of orange/red like the peppers used to make it. The soup will warm you down to your toes and back up to your ears. 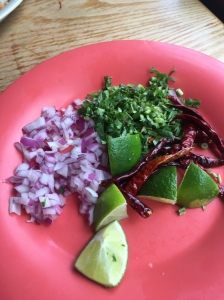 I was a massive fan of the goat soup and felt a hole in my culinary soul when it came off the menu.

Then last year, a bit of goat magic touched down in Cincinnati when Goat Soup got a yearly reprisal at Bock Fest. It goes like this: Every spring Cincinnati has a weekend dedicated to our German beer-making heritage, and specifically honoring the traditional spring beer brewed and consumed by Friars for hundreds of years, Bock. The beer got it’s modern name from Germany where it was called einbock or billy goat. Goats and bock beer, and therefore goats and the Bock Festival are duly united.

Sure, bock beer has nothing to do with Mexico but goat soup is the real Mexican deal. The folks at TM did the goat-themed math and goat soup became part of the Bock Fest celebration.