The perils of visiting your friends’ farm is that sooner or later, especially say at the height of planting season (!) you’re going to be put to work. After an hour or so of me screwing around on the back porch this morning, I got roped into planting three rows of tomatoes and a row of eggplants. I kind of liked it, but…

It didn’t take today’s tourist-farming session to remind me why I don’t want to farm for a living. First off, farming starts early when the grass is still wet from morning dew. I know it sounds poetic, but walking through wet grass is massively uncomfortable to me. Since the older I get, the more comfortable I want to be, dew-feet is unacceptable.

Also, if you want to zoom into the feature picture to the lower right hand corner, you’ll see a sagging tomato plant and a container with water. That’s the triage unit for the plant I snapped by knocking it too hard with the hose because I don’t know nothin’ about no farmin’.  And here’s how hard farm work is: even though I probably killed one of their plants before it really hit the ground, thereby cutting off a percentage of tomato revenue, they let me keep working.

My point is, don’t bitch about the prices of real vegetables at the farmer’s market until you’ve spent a day in their shoes.

My agri-tourism day ended at the Peaceful River Farm Vegan and Gluten Free Dinner. Chef Caroline Morrison from the 100% vegetarian restaurant The Fiction Kitchen cooked an incredible 5-course meal. She talked about the importance of community in cooking local food and how it’s an important labor of love for her and her partner Siobhan.

Peaceful River is a working farm and education center. Owner Larry Newlin estimates over 3,000 visitors have come to learn about sustainable farming and the importance of eating good, locally grown food.

The dinner was supposed to be held on the back patio, overlooking the field of greens and an aesthically pleasing kitchen garden. A thunderstorm blew in and changed the eating arrangements at the last moment, but the farm tour went on as planned. 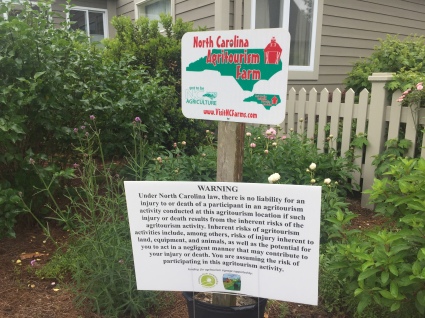 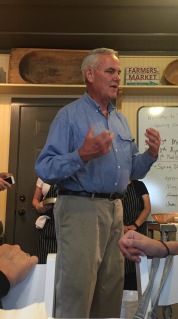 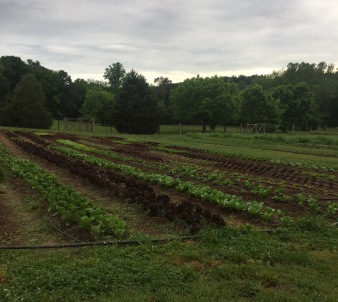 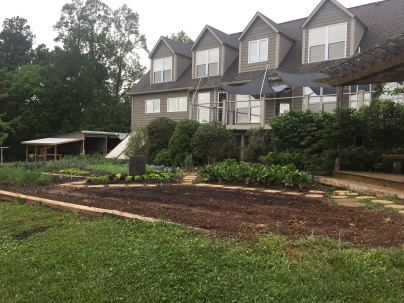 The menu used many ingredients from Peaceful River, as well as other local farms. 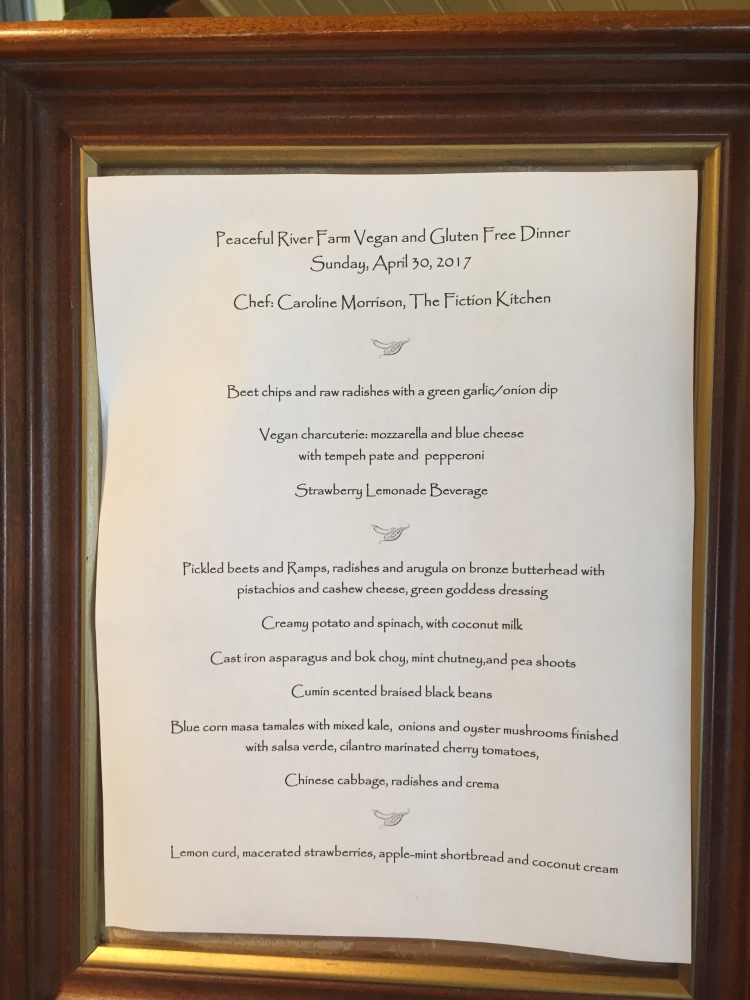 For the appetizer, beet chips where lightly fried, and though not crisp, had a very fresh taste. The vegan charcuterie worked hard to replicate a traditonal appetizer spread. The vegan mozzarella was decent and the blue cheese had an okay texture but none of the sharpness of a “real” blue cheese. The tempeh pate looked awful (I’m sorry to say). It had a nice flavor, but dry texture. The pepperoni actually tasted great and had a wonderful texture, not really like “real” pepperoni, but very good on its own merits. I don’t want to think of it as pepperoni, but more as pepperoni-inspired. 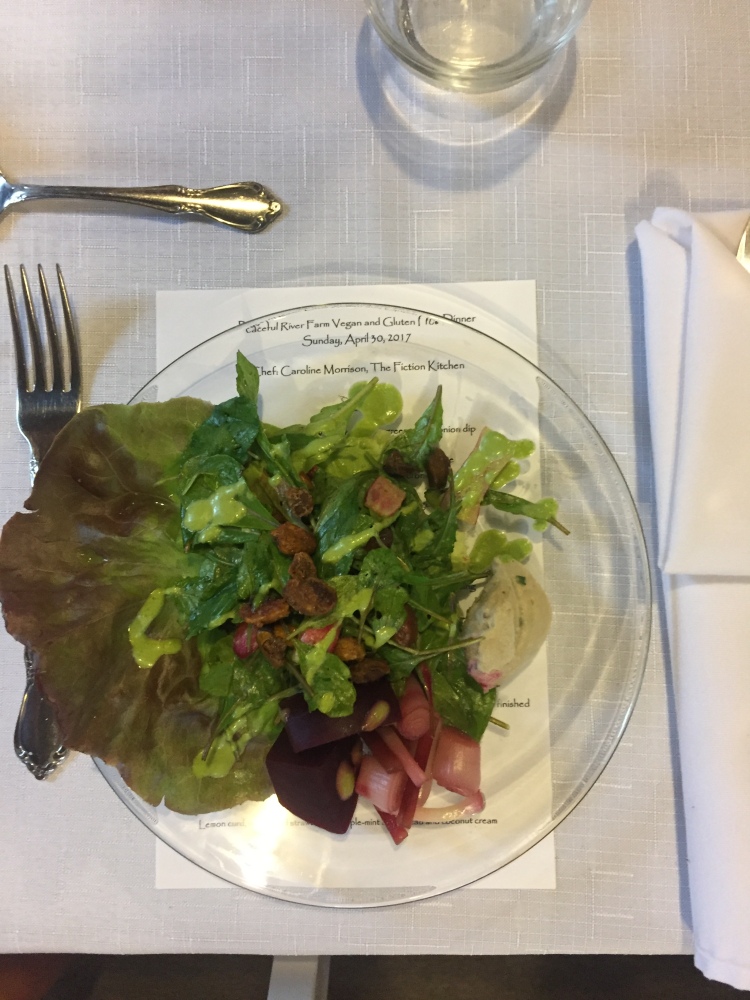 The next course was a creamy potato and spinach soup with coconut milk. I thought the flavor was good, but the texture was too thin. If the soup had been less puréed, I think the flavors would have come through a bit cleaner. 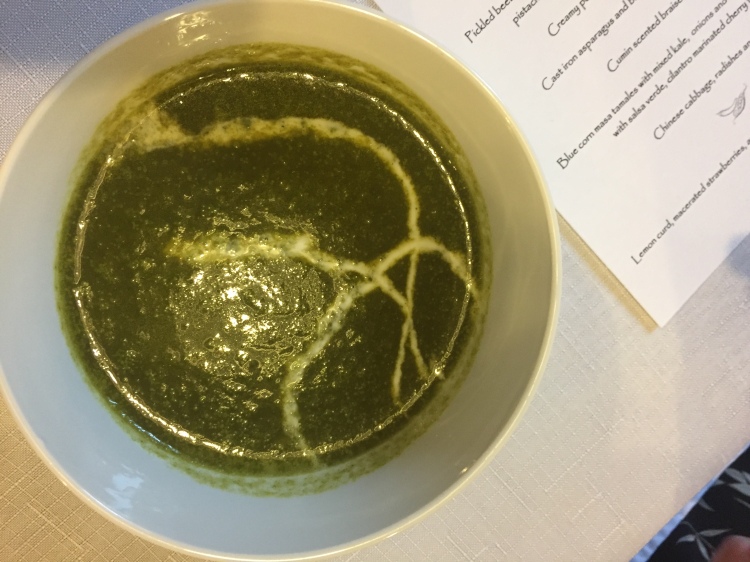 The asparagus/bok choy was delicious but the flavor profile didn’t match the main course. I know Chef Caroline was trying to keep it local and seasonal, but lime or chili flavors and this side would have better complimented the excellent southwest flavors of the tamales. The texture of the tamale filling was very good, with they oyster mushrooms giving some depth to the dish.The black beans (another over-puréed component) was seasoned perfectly, and because of the thin consistency, worked better for me spooned over the tamale rather than as a base. Or maybe that’s because I’m a just a girl from the Mid-West who want to put “gravy” on everything.

Also, in the picture below, the food is not plated by Chef and her crew. Due to being hastily being  moved inside, original plans for how the dinner would be served were scrapped, and we all plated our own passing plates around the table family style. 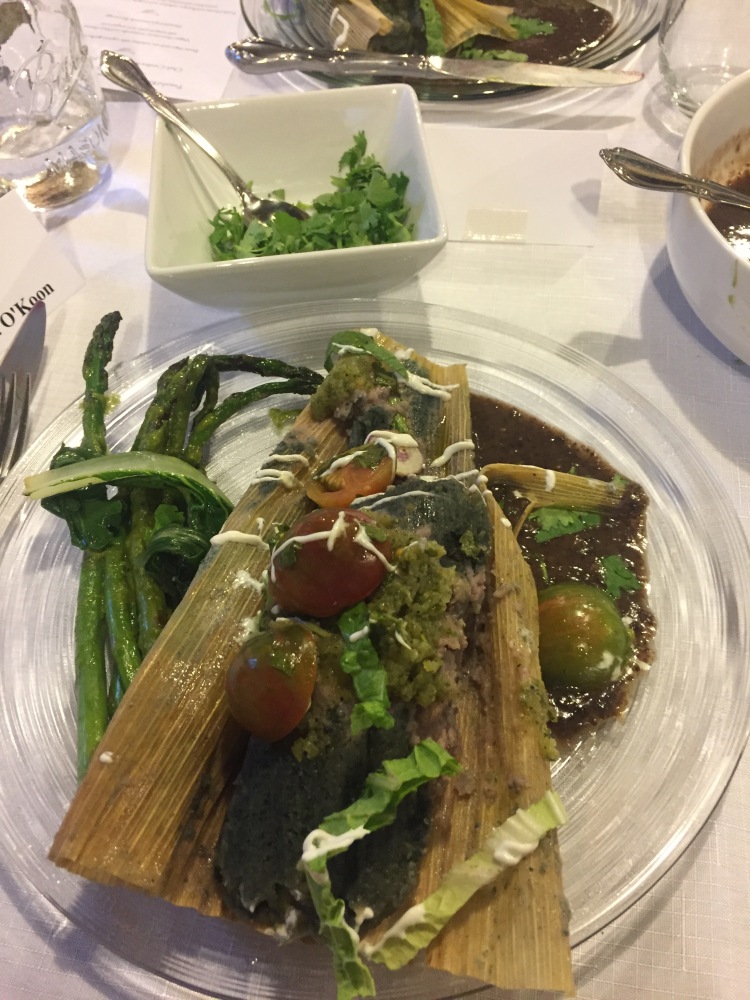 Finally, a lemon curd dessert with macerated strawberries, apple-mint shortbread and coconut cream was a light ending to a really well-done meal. 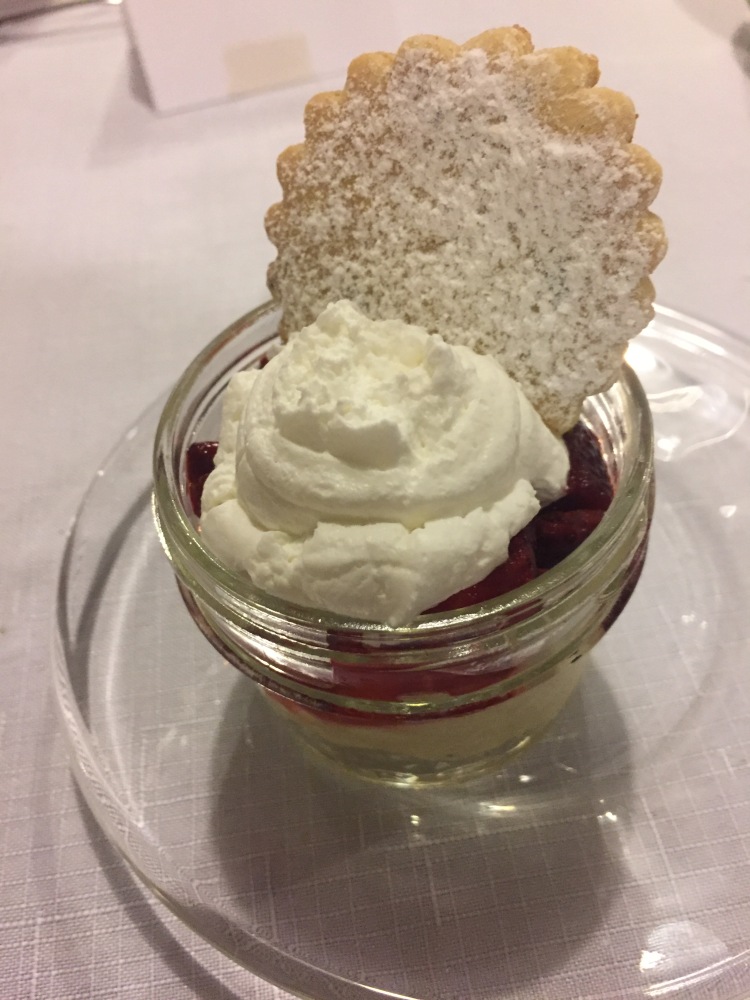 I’d never been to a farm dinner and only had what I’d seen on The TV to guide me. The evening was nice, and laid back. It was BYOB (and semi-related, don’t get me started on North Carolina’s byzantine liquor laws) and while mostly an older crowd, had a few kids and a millenial blogger (http://www.trialandeater.com/) filled out the 2 dozen or so guests. I very much enjoyed listening to the John and Lee Newlin talk passionately about their farm, their community, and the importance of food in our lives.