I’m in a bit of a cooking frenzy at Chambre Du Mange* today. It’s based on cravings + social responsibility (to bring side a side dish to dinner) + my regular Sunday cooking for my lunches for the week. Also known as food I want to eat, food I want to share, and food I should make to stick to my budget and healthy eating for the week.

Anyway you slice, I’m talking about volume. I plan on having separate posts for some of the items I’m cooking, but this post is about how busy the kitchen is today.

First up, I was out of granola. I’ve been making my own for a couple of years. It’s an easy, lazy-ish recipe for Sunday mornings that makes a lot and stays fresh for a couple weeks (maybe longer, but to find out, I’d have to drastically slow-down my granola intake…which is not going to happen.) 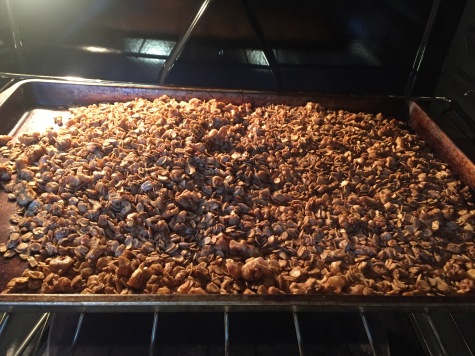 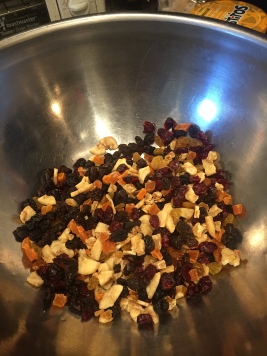 Dried fruit patiently waiting for the oats to get done fooling around in the oven.

Next up, I kind of felt like scones. King Arthur Flour has a great basic scone recipe. I make it with raisins or, when Craisins are on sale at Kroger, I make Craisin scones. The dough comes together quickly but I ran of time to do the actually baking. I’ve got the discs of dough in the fridge to cook at a time to be determined.

I couldn’t lolly-gag with scones because I had to move on the making some food to take to my friends’ house for dinner. I was in charge of starchy side dishes. Easy! I made a potato casserole, actually a traditional Jewish potato kugel made with just a few ingredients that bakes up beautifully. While it baked, I was working on prepping pieces of the three other things I had yet to make.

Like a standard macaroni in cheese with extra sharp cheddar cheese and no fooling around with add ins. (Though I like a panko-cheese crust topping that the 10 year old at the table was in great pains to scrape off.) 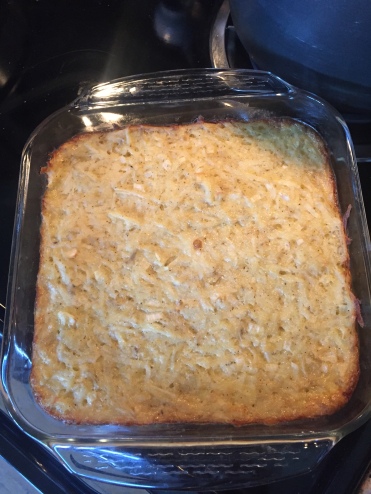 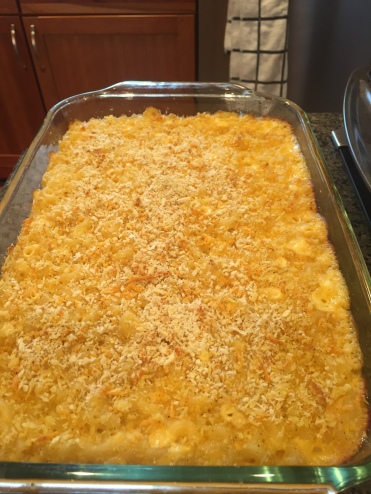 Mac and cheese in all its comfy cheese goodness.

I packed the two casseroles in my old-school cooler and headed off to take a break from cooking to eat dinner.

After my break, I came right back to my kitchen and finished off prepping for the week of lunches. I was working with two recipes with similar flavor profiles and ingredients. Both recipes required just a bit of stove work, and I like to get that done and cleaned up so for the rest of the week I just have to assemble.

The first recipe is a cold Chicken Cabbage wrap, with shredded cabbage and chopped broccoli, that takes its flavor cues from the Asian pantry (soy and ginger). The recipe called for 1 cup rotisserie chicken breast, but I braised some boneless chicken breasts in a bath of Asian flavor. Oh yeah, for me the recipe as printed is a starting off point not a gospel I have to follow.

The recipe also called for 1 tablespoon of organic lite sesame ginger dressing. I don’t know what this, nor did I waste one second researching it. I just assumed it was some over-priced dressing from the organic aisle of the kind of store I don’t shop in. Plus, 1 tablespoon of an obscure ingredient is a bunch of crap.

The answer to this ingredient dilemma was found in my other lunch meal of the week, Bahn mi lettuce wraps, which also highlights Asian flavors. That recipe called for a homemade siracha mayo, something understandable and easy to make. I made the mayo and mixed it into the chicken and veges. The Ban-mi is browned seasoned pork with pickled vegetables. I got the pork part cooked up and set aside and will chop up the veges for the topping later in the week so they stay crisp.

For the week then, I’ve got granola for breakfast (actually enough for the next two weeks), a chicken cabbage salad and ban-mi pork both ready to be put into wraps with fresh vegetables cut each day. Plus, I have some mac and cheese leftover from dinner to supplement any hunger issues. I may bake the scone dough or freeze it, depending on how things go tomorrow. All in all, I had a pretty good day in the kitchen so I don’t have to be concerned with food for the rest of the week.

*When I lived in my house, I wanted to give it a fancy sounding, food oriented name and came up with Casa du Mange (Spanish and French from a mixed up Mid-Western Woman for “House of Eating.” When I moved to my apartment, I downgraded casa to chambre, French for room.

One thought on “Look Who’s Cooking”