The week in movies: Sunday was the monthly Black Folks Make Movies event at the Micromini Cinema. This month four of us watched Sweet Sweetback’s Badass Song, a 1971 Black Cinema cult classic featuring a mostly indecipherable plot, terrible acting, an awful script, and some pretty decent funk music. Originally rated X for it supposedly unsimulated sex scenes, the movie is known for kicking off the Blacksploitation film genre because it made several million dollars on its small budget. Interesting way to spend a Sunday afternoon.

The week in Civic Duty: Though it has always been my dream to be on a jury, I worked to be excused from jury duty this week due to my temp job that doesn’t compensate for jury duty. Paying rent trumps participating in the legal system. I’ll try to double-down on displays of patriotism to make up for my lack of service.

The week in choosing wine: I don’t drink rosé wine, but my friends do. The last bottle I brought for the rosé drinkers got a “meh” rating. Hoping to do better this time, I headed to 1215 Wine, who, in my mind, are always pushing the rosé. [They really aren’t, it’s that I’m so adverse to it, the mere mention sounds pushy to me. LOL!] They picked Mattiason Rosé and I’m happy to report it was well-appreciated.

The week in Ham and Punctuation: The ham in the Cubano sandwich at Panino. really was a highlight of the week in food. The fact that their official restaurant name has a period in the title, was the low point of the week in punctuation (and it was a week when I was grading test answers from a high school Social Studies assessment).

The week in marriage: For the next month or so, almost every time I’m at a downtown park on Saturday afternoon, I’ll be dodging wedding parties out for thier official photographs. One day last year, I was as Smale Park on the river and had to move from my seat three times from three separate wedding parties. It looked like a montage from a bad romantic comedy where the single woman in besieged by happy brides. On Saturday, I saw my first bridal party of 2017 at Washington Park.

The week in neighborhood construction:  The swimming pool across the street is supposed to open in two weeks. From the looks of things, I still have some time to work on my smokin’ hot beach bod. And Joe’s Diner, a landmark building down the street from the alleged pool, had workmen inside for the first time in a couple of years. I asked the two guys when they thought the place would reopen and I got a very non-committal “soon.” 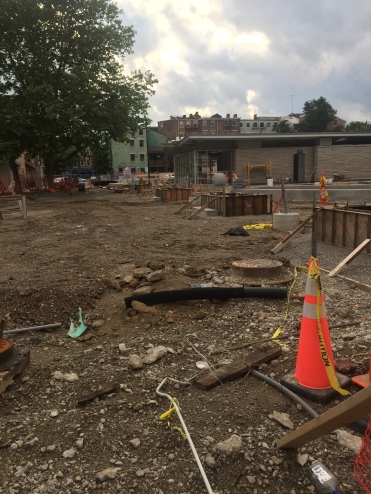 Will the Diner ever reopen?