I mean this literally. I live close enough to walk. It’s just a bit over a mile (I’d like to note uphill the whole way!) and not a bad walk except for the three main danger points: crossing Reading Road, crossing the I-71 entrance/exit ramp (and slipping past the homeless guy collecting money on the median), and crossing Gilbert. That’s approximately 20 lanes of traffic. Then, people in the know cut up the Elsinore Hill Steps behind WCPO that take you right to the Museum. Based on the dangerous crossing on the walk up, I knew I would be taking the bus back into town. Best $1.75 of the day.

Final batch of stairs on the secret neighborhood back door route

A civilized way to head back downtown…safely inside a bus

The bus stop at the Art Museum is fancy.

As for art, the main display was the touring Tiffany glass exhibit. Tiffany glass back in the day was my introduction to what is real and fake in the antique world. I remember as a teenager reading about Tiffany fakes on the market and how that made me become skeptical about the world around me. At the Art Museum they made a big deal of this forgery and had a room where three of the lamps amongst the true Tiffannys were fake. I picked them out immediately and scornfully.

The real lamps and windows are especially beautiful and skillfully crafted, and the displays were put together nicely. My favorite was where they’d laid out a work in progress that showed how painstaking the craft was. I was also surprised to learn how many women were employed by Tiffany.

Speaking of women artists, The Cincinnati Art Museum sits in the same neighborhood as Rookwood pottery which opened in 1880. Owned by Maria Longworth Nichols Storer (1849-1932) it was one of the few women-owned manufacturers in the country at the time. Storer was one of Rookwood’s top artists, and her rivalry with  Maria Longworth Nichols Storer (1849-1932) is on display. 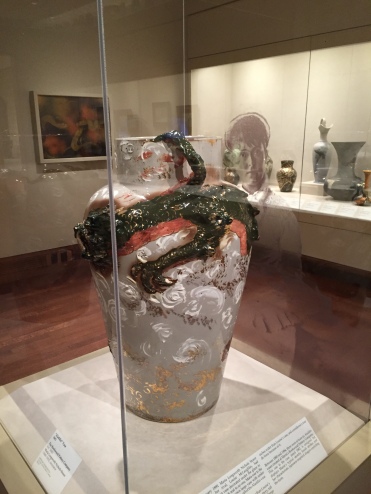 The Rookwood exhibit is relatively large, and puts our local company in perspective with what was happening around the world with lots of examples of different styles and comparisons to other manufacturers. As I was walking through the museum, a large group of kids on their second to last day of school was also working their way through. One of the kids, exasperated, said, “So many pots.” Which essentially sums up the exasperated feeling of a newbie art museum visitor trying to take it all in.

For my first visit, I was concentrating on trying to see as much as could without being too intense. I made a tactical error by not realizing they had a free tour at 1 pm, but I did horn in on an elementary school tour for an explanation of an Edward Hopper painting. I was standing nearby listening to the docent..until I thought it looked creepy that a single old person was lurking near the children.

My three standout painted pieces were:

Elizabeth Nourse is a Cincinnati artist whose portrait is painted on the side of a building on Eight Street as part of the City’s Art Works Mural Series. I was happy to see several of her pieces in the Museum because I’ve been eating dinner across from her mural for months.

The exhibit I went back to twice was contemporary South African artist WIlliam Kentridge’s video More Sweetly Play the Dance, essentially a seven screen music video. Infectious music and images swept across the darkened room, a beautiful display of the possibilities of technology in art.

The Art Museum reminds me how much I don’t know about art. I recognized just a few names. I know I like modern art (from the early 1900’s on), but I also like a good still life from any era. Picasso works for me as do Italian Renaissance painters. I like to be surprised and amused. I like to watch other patrons interact with art. Museums, in general, are wonderful public spaces where through the past, we can see the future, and find our place in the present.

The Cincinnati Art Museum is a wonderful spot to hang out at in Cincinnati. It’s on Metro Bus Route 1 (which also goes to the Taft Museum and the Museum Center). There’s a nice café to take a break in, or you could step outside for a walk around Eden Park. Best of all it’s free!

One thought on “Cincinnati Art Museum”