This Week in Local Music: My week started with a concert in Washington Park (in Over the Rhine) by the folk/indie band Over the Rhine. Over the Rhine, the band, plays in their hometown Cincinnati frequently, but it’s always nice to see them in Over the Rhine the neighborhood. So meta! The concert had been abruptly rescheduled from Friday due to weather which probably lowered the attendance, but the smallish crowd and the band showered each other with love on a beautiful night in the hood.

This Week in Proper Office Attire: Look, I can’t stand having to wear black or blue, gray or brown. On Monday, I wore my orange pants to the office. Corporate America survived.

This Week in Recipes: I cooked two Asian-esque recipes from the “Best-Ever Chicken” cookbook by Linda Fraser. I assure you, it’s not the “best ever”, but I do use the recipes in the book as a starting point and they usually turn out pretty well. “Best Ever Chicken” gave me the idea for a Chinese-Style Chicken Salad and Thai Fried Noodles. Two meals that got me through the week of lunches and a couple dinners. 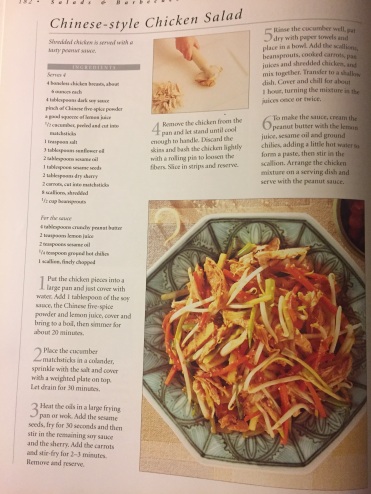 Not enough crunch or color. 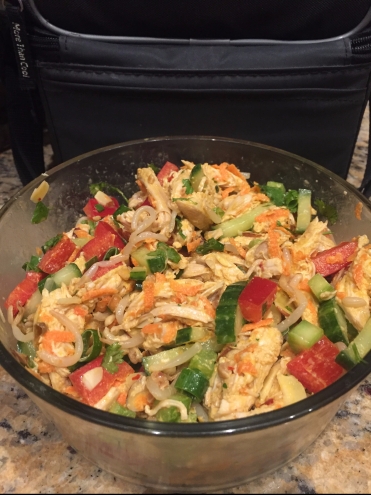 This Week in Really Good Food: Stopped in to Abigail street for scallops and glass of wine. The food and service their is always stellar. The scallops were probably the best scallop dish I’ve ever eaten. And I was so enthralled, I have no other details to share.

This Week in Reading: For the first time in a while, I’ve had a few long stretches were I could just do some reading. I finished reading my 16th book of 2017, In the County of the Blind, by Edward Hoagland and got well into my 17th book, Three Years with the Rat by Jay Hosking.

This Week in Local Watering Holes: Had an unscheduled trip to my Mom’s house to look at the broken (as in it won’t turn on) lamp post. I looked at it. And then I decided the best thing was for me and my Mom to go eat lunch and I’ll call someone knowledgeable to fix it. The unschedulely-ness of this brought us past a new-ish bar in her neighborhood, The Lucky Turtle, that isn’t usually open when we pass by on our regular Sunday morning grocery trips. Since nothing was going as planned, we stopped in. I don’t think my Mom had been to a bar bar (not a restaurant bar) in years. She sat at the bar, sipping a cocktail, and kind of got into the bowling that was playing on ESPN on the big TV. She looked like a bar pro. (The apple doesn’t fall from the tree.) The Lucky Turtle has a neighborhood feel, with lots of interesting craft beer on tap and lots of bourbon. It’s run with love and affection, and a can-do attitude by the owner who said he just wants to serve drinks in a place that looks like his and not something out of a marketing handbook. #homey

Not fancy, but it works.