The sun is beginning to set on my group’s Rosemary Beach Trip.

First up today, things got off to a shaky start…and I’m not just talking about my rusty biking skills. I jumped on my kid’s bike and gamely rode down the bike path to see what I could find. Destination One was the first public beach I found, Inlet Beach. At Rosemary Beach, beach access is limited to specific guests through access codes on the accessways. The public beach was, well, open to the public, so it felt more inviting like a beach from my childhood. It was also less developed so I could see the dunes that would naturally occur on the gulf side beaches of Florida. I also got a nicer picture of the coastal warning flags. 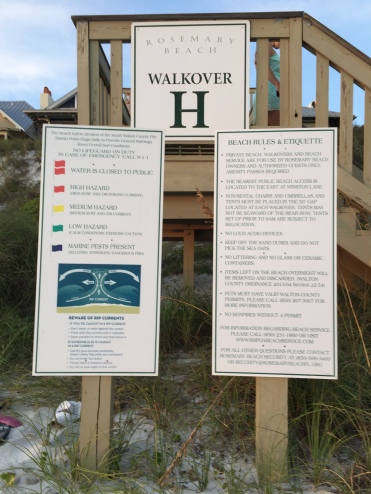 These explanation warnings are posted at Rosemary Beach. 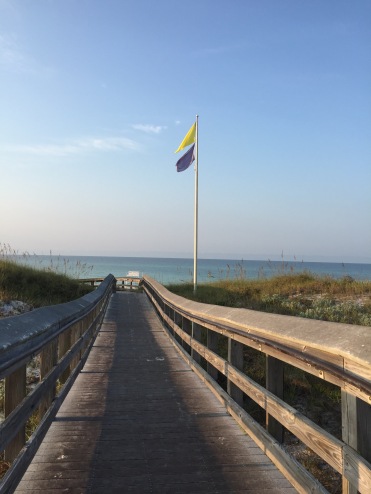 These are the flags at Inlet Beach (I think) 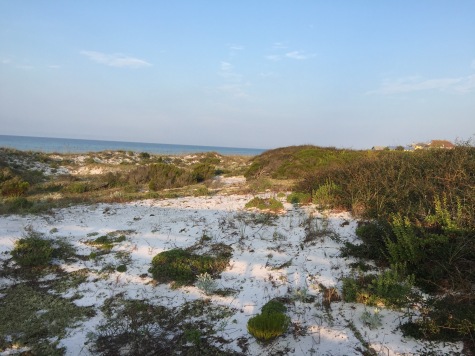 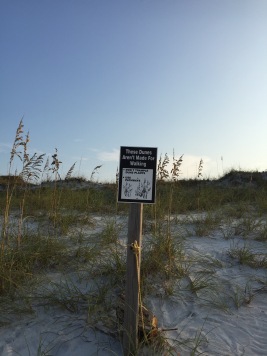 These dunes weren’t made for walking!

After the public beach, I biked past this dandy piece of marketing:

After a bit I came to the end of the bicycle path which landed me at the entrance of Camp Helen State Park. I hadn’t researched where I was headed, so the park was a complete and pleasant surprise. Until I got to the entrance. Being early doesn’t always work.

Lack of state park and oncoming hunger sent me to breakfast.  I came across Big Bad Breakfast, the newly opened, and second of two BBB restaurants from James Beard Award winning chef John Currence. The food in Rosemary Beach as been blasé with the exception of the Cowboy Kitchen.  I found BBB kind of hidden, not in a proper town square, but technically one beach over in what seriously looks like an apartment complex (more so than a hotel/rental property, which it probably is). It gave me culinary tingles. I’m using that as the excuse for the rotten picture I took of the menu. I wanted the shrimp and grits bad, but knew I couldn’t fit it all in my belly. I got the fried chicken on a biscuit with sausage gravy and cheddar. Just crazy good! 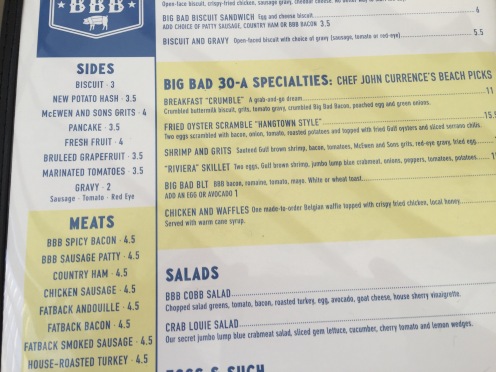 Better pictures of menus have been taken! 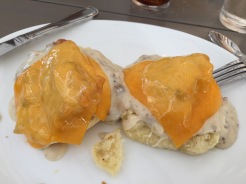 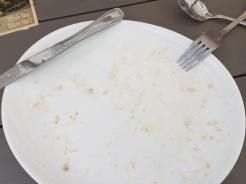 After  an afternoon laying on the beach, then back to the house for snacks, we had to zip back over to Grayton Beach to pick up some crafts from yesterday’s visit to the shard shack (4 of the group went crafting yesterday while the rest of us sat at a local bar).

Seaside Beach is where we ended up after picking up the finished work. We walked around for a bit then stopped for a cocktail at Bud and Alley’s Rooftop bar. Seaside’s vibe is night and day different than Rosemary Beach. It’s more lively and casual with more options for dining and cocktails. It’s a super cute town (used as the setting for Jim Carey’s 1988 movie The Truman Show) with fun shops including a terrific local book store Sundog Books.

Back in Rosemary Beach I finished the night off with a glass of wine and a salad at Edwards. The salad and lobster stuffed mushrooms were fine for the price, but meh for the chi-chi image Rosemary is trying to project.

Worse though, like almost every place I’ve eaten at over the last four days, my drink drink ended up in pool of water. I hate to drop a little science in, but we all know condensation collects and drops to the table, especially in warmer temperatures. This is the south. The air is warm and the drinks are cold. I can’t be the only person who doesn’t like to feel water drop off their glass every time they pick it up for a swig. There is a solution. It’s a coaster. I don’t think I’m asking for much!