This Week in Local Music: This week Cincinnati/Northern KY lost our beacon of independent music, and grand promoter of local music when WNKU radio left the air after 33 years of broadcasting. The loss was surprisingly emotional for me as a music fan. As much as I enjoy corporate radio music for what it is, that music and the stations that play it are empty. WNKU was run by people who cared deeply and were extremely knowledgeable about music and musicians. I learned a lot about music from listening to their station and attending their sponsored events. The silence of 105.9 will reverberate.

This Week in Local Music Festivals: Promoting local and emerging artists has been the goal of Mid-Point Music Festival since 2001. The event used to be held in bars throughout downtown and OTR but as the event grew (and the urban renaissance changed the downtown/OTR landscape) MPMF has continued to experiment with new set-ups. (The less said about last year’s debacle, the better.) This year the event showed some of it’s old can-do spirit . Bands played in the up and downstairs stages of the Taft, and the hardly-if-ever-used-for-music up and downstairs spaces of the Masonic Temple, next door.  Overall the weekend was great. The Sunday line-up was outstanding, headlined by Cincinnati’s own Walk the Moon, who always put on a great show for the home audience. As always, there were a few quirks and kinks along the way which was fine because that really is part of the Mid-point experience. Every year it’s a thing for long-time MPMF participants to say “this is probably the last year they’ll do this,” but it never is. Even though it’s a small festival, Cincinnati is richer for it. I very much look forward to the 2018 version.

A couple of quick things…First, every time I looked up at the Even Tiles playing their set, I kept seeing Darren Aronofsky.

Not playing in a Cincinnati rock band

And the Masonic Temple hosts plenty of events, but me and my group had never been inside. It’s an odd building. 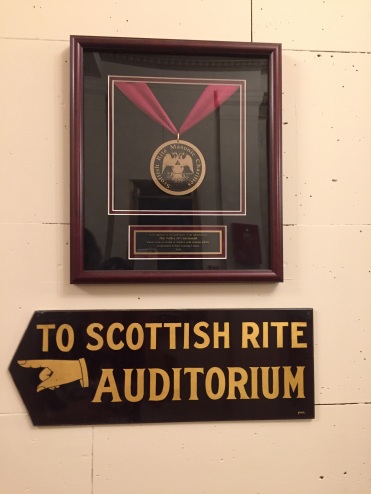 The Mason’s get new phones every 70 years or so.

We don’t need no stinkin’ hand rails. (Also, about 6 steps up, your brain starts trying to find hand rails.)

Musically, I was pleasantly surprised by the very chill and thoughtful local band Delicate Motor.  Flint Eastwood blew me away. Dan Deacon used his set to create an exuberant dance party that was thrilling. Charlie Bliss, Even Tiles, Automagik, and Sphynx were other standouts.

Here’s one last thing about music. On Sunday bands started playing at about two in the afternoon. Walk the Moon, the headliner, was slated to play at 10. They had a handful of dedicated fans staking out space by the stage for the entire eight hours. I love the dedication!

This Week in Dirty Laundry and Planning Ahead: I’m pretty busy socially most of the time leaving some of my domestic activities on the back burner. Since I know this about me, one thing I do is own a month’s supply of underwear. This gives me a cushion in having to do my laundry when I’d rather be out with friends. Anyway, I hit a critical point when I got dressed on Saturday.

This week in I Don’t Get What’s Happening: This afternoon I took my Mom to her favorite Kroger (The Blue Ash Kroger) where the most of the meat and dairy department was covered with plastic sheeting. There weren’t signs telling people not to shop, but the plastic was taped so it was hard to break through to get to the products on the other side. People were shopping and every time someone broke through, a Kroger associate would re-tape it. I’m sure Kroger has a very logical explanation. I do not.