The Week in Cat Museums: Maneki-Neko is a Japanese cultural icon known for bringing good luck. Literally translated to Beckoning Cat, a cat with an uplifted paw can be seen at the entrance of shops throughout Japan as a good luck Talisman. The Lucky Cat as it’s popularly known, has been used on thousands of types of merchandise and the items are extremely collectible. There are three Lucky Cat Museums showcasing Lucky Cat Collections in the world. Two are in Japan, as one would expect, and the other is in Cincinnati, OH which, I don’t think I’m under-estimating, is unexpected.

The space is small, but packed to the gills with lucky cat paraphernalia. It’s tucked into the Essex art studio and noted in the popular Atlas Obscura as a curious and wondrous destination. That it is!

Welcome to the Cat museum

Every surface is filled

The Week in Helping Puerto Rico:  The good folks at the Covenant-First Presbyterian Church on Elm St. provided space and support for one their members who is from Puerto Rican to organize a benefit concert at the Church to help Puerto Rico recover from Hurricane Irma. The two hour concert was a mix of Broadway and show tunes, classical, and traditional Puerto Rican music. I enjoyed the massive historical organ that led off the program. The way the big sound of a pipe organ fills a sanctuary and vibrates the room is closer to god than the words in the books, in my opinion.

The program ended with soprano Cindy Candelaria and the warm piano playing of Sonia Morales-Matos, both Puerto Rican natives, performing three traditional songs of the island. The heart and soul and emotion was evident. Beautiful.

The Week in “This Cold Isn’t Going to Happen”: Well, the cold did happen but it was mild, but to keep it that way, I stayed in on two nights when I normally go out. So I’m calling it a draw…the cold kept me in a bit, but I didn’t get super sick. Also, on Thursday, I thought I was done being sick so I grabbed myself a bourbon. Weirdly, some symptoms made a reappearance, so I did the only thing I could think of…I took some cold medicine. Bourbon + cold medicine was a great way to end the ill-ish week.

The Week in “Bad Health Ain’t Gonna Stop Me”, Part II: At my part-time job at TJ Maxx, I see a lot of happy shoppers all the time. This week I waited on an elderly lady who may have at some point had a stroke (her speech was difficult to understand). Also, this sounds gross and terrible, but she had some blots of blood on her blouse that appeared to be from a cracked open sore on her hand. I mention her, because she was perhaps the happiest customer I had on my entire shift. Just coming out and finding some clearance purses seemed to give her such great joy, I was caught up with her Chutzpah.

The Week in Used Book Stores:  The Ohio Book Store on Main Street is a classic used book store that does book binding/restoration in the basement, but has four floors filled with treasures and (sorry book lovers) trash. It’s a great place to Book-Geek-Out for an hour or so. 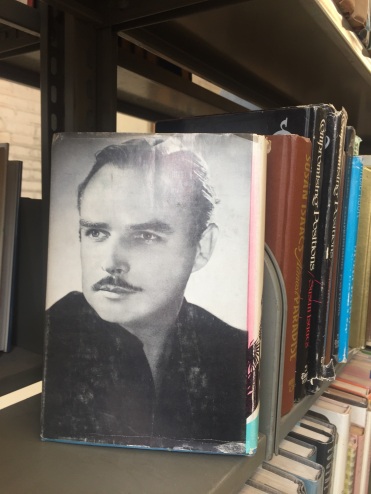 In 1949 authors were swashbuckers, apparently

Google Books describes The Wrath and The Wind as: “Historical romance of Florida in the 1840’s, during the slave-running days.” Also, this book has not aged well.