The Week in Flood Water:   The Ohio River had it’s worst flood in 20 years, cresting on Sunday. Living so close to the River, I’m at the waterfront a lot. The parks and public space give the city its boundary and its soul. Of course the river stage rises and falls all the time. It’s one thing to see the river at the foot of the flood wall and another to see it spill over the wall. It’s a touristy thing to go see the flood but it’s important to realize the rising water is dangerous and scary. I’m in awe of the river always, but even more so when it is outside its banks letting us know who’s boss.

Yeatman’s Cove…I’ll walk through here a thousand times this summer!

I sit under the paddle wheel reading all summer long.

The foot of these steps will draw me to Goetta Fest and more.

The Week in Collecting:  I’ve been collecting miniature items since I was a little kid. My Mom told me I could collect anything I wanted as long as it fit in my bedroom…so I went small. I never stopped adding to the collection. It grew with me when I was first able to buy a cabinet to show them and then a house to put that cabinet in. And then a second cabinet. Unfortunately, as I’ve down-sized, my ability to display my collection got down-sized as well.

This week, I got the logistics together to re-set my display. For the first time I laid out every single piece. I culled them down  to make a rational display that fits my space. Some doubles and second tier stuff got packed up for a later. Some got sent to Goodwill, maybe to start another kid on a collection. And, now I get to see my collection and wave to the polar bear I’ve been waving to for years. I missed that little guy and all the others. 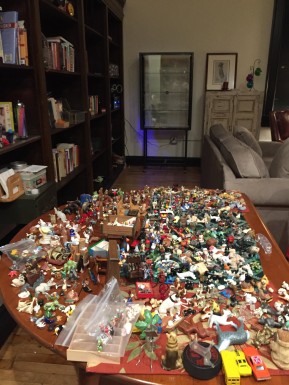 It’s a lot. And It has to fit into the cabinet. 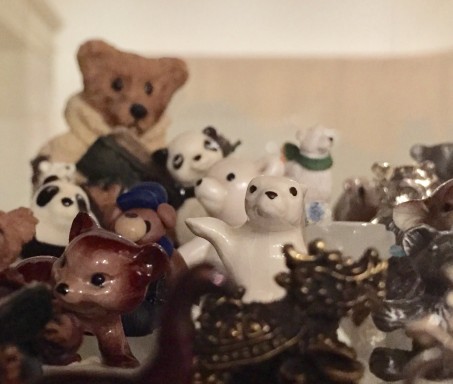 In the bear, dragon, and squirrel part of the display. Hello polar bear!

The Week in Goats: Cincinnati’s Spring celebration saluting Bock Beer and our brewing heritage. Bock is the beer. Ein Bock is the German pun that makes Goats the symbol of the festival. The weekend-long event kicks off with the Bock Fest Parade. In Cincinnati no parade will ever rival the Reds Opening Day Parade, but in it’s own way, the Bock Fest Parade stands alone. It’s short, funny, and charming.

The big goat gets the parade going.

These crazy kids Bock around the Clock!

And, though technically it doesn’t fit in the time noted above, the Sunday of Bock Fest is the day I got to Taqueria Mercado for Goat Soup. Goat is not unheard of in Mexican cooking, and TM used to have it on the menu all the time. Now, they have it once a year as a tie-in with Bock Fest.  A delicious part of the celebration!

The Week in Sure, I’ll have a Shot of Jameson: I’m a much better and controlled drinker than I used to be, but you know, sometimes, drinks happen. Passing by Mecca, a bar I just don’t go into on the weekends because it’s filled with young idiots (I love them, but I don’t need to hang out with them), there was draw. Me and my pal had what we thought was going to be the final drink of the evening. It’s not our fault some kids invited us and we followed to the next bar. At Below Zero, a bar I just don’t go into on weekends because it’s filled with bridal parties and suburbanites slumming it at the gay club, I gave up. I started drinking like a young kid (buttery nipple shots) and, that’s right AND like a suburban housewife (Maker’s Mark with Diet Coke). And yes, I paid for all of that with a bit of a hangover the next day. It was worth it. Totally.

The Week in Drag: That trip to Below Zero did allow me to see the Cabaret Show, which I used to go to before it became so big and trendy. The guys who perform kill me with their dedication, strength, and talent. 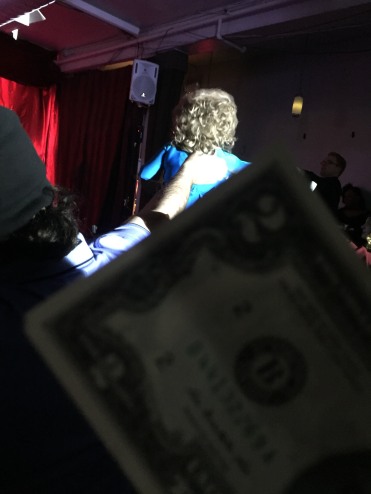 I had a two dollar bill in my pocket, and I thought who better to appreciate a $2 bill than a drag queen!!!