The Week in Anthony Bourdain: I was surprised and saddened to hear of Anthony Bourdain’s suicide this week. I mean dammit, Tony! He was definitely in his own category of philosopher/chef/cultural critic. It’s funny how in the midst of the shallowness of our celebrity worshiping culture, a person can break through and say something meaningful. What I learned from watching him is that food is one way to break down the barriers of what divides us. If we listen, and respect, and learn from one another, the world would be a better place. The fact that it would be tastier is just a by-product. I got involved talking about Bourdain’s death this week at a bar with a couple of strangers. All three of us cried. Freakin’ sad.

The Week in a Music Variety: On Tuesday I was cooking dinner and all over the map on what music I wanted to listen to . I started with Joni Mitchell’s Court and Spark which I hadn’t heard in years. I love the lyric in Free Man in Paris “I felt unfettered and alive /
There was nobody calling me up for favors /And no one’s future to decide.”

Once my inner-hippie was tamed, I moved onto the Metal Band Breaking Benjamin’s album Dark Before Dawn, and finished up with the 1958 jazz album Coleman Hawkins and His Confreres. It’s super cool to have any type of music available for my every whim. I awarded myself the Eclectic Play List of the evening award.

The Week in Catching a Mid-Week Show: I was a little restless on Thursday night, so I walked over to MOTR to catch the Huntertones. One look at the tuba resting by the side of the stage pre-show and I knew I’d made a good choice. They did two sets of mostly upbeat instrumentals for a small but enthusiastic crowd. I was pleased by the beat box vs. tuba song. It was interesting to hear the contrast of styles blending and they mercifully only played one song like this so the novelty didn’t wear off. 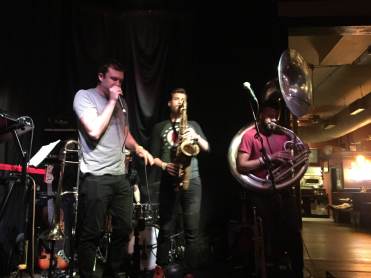 Dude doing beat box on the mic vs. the tuba player. Cool.

The Week in the End of the Music Festival: I spent three days at Bunbury and my favorite show of the weekend happened on Sunday. Sir Sly put on a fun set at the packed River Stage. Bunbury is laid back music festival that’s nowhere near as flashy as others around the country, but that’s part of it’s charm. I love going every year.

The Week in Keeping in Touch: I made a few friends in High School and College that I still keep up with, decades after we misbehaved together and have settled into adulthood. Except for me, everyone is married with kids who are now in high school or college. They live in houses in the suburbs. I’m single, no kids, and live downtown. A 20-something year old friend of mine, after listening to me contrast our lifestyles, asked me “Why are you going to hang out with ‘them'”? It’s hard to explain a lifelong friendship to a young person, other that asserting that it’s important and correct to try to keep at least somewhat in touch with the people who positively impacted you on your journey.

The Week in Starting with Newbies: In the same week I was hanging with my oldest friends, I met a couple new people who have the promise of being great friends in this next stage of my life. I’m happy to keep meeting good people and sharing our lives through friendship.

The Week in Triple Crown: On Saturday, I stopped into the Bayhorse Cafe just in time to watch Justify capture the Triple Crown. It is a horse-themed bar and people were there to watch the race. Super fun to experience a sport rarity with a group of fans. And, the owner called in to tell the bartender to make boiler-makers for anyone who wanted one. Cheers, Justify.

The start of the race.

The end of the race. Boilermakers on the house!