This week in Lost Holidays: July 4th fell on Wednesday, inserting 1/2 a weekend right smack in the middle of the work week. Almost all the locally owned restaurants downtown were closed Wednesday, with a few adding Tuesday or Thursday to their employee vacation. So, finding a restaurant for dinner on the 4th was tough (Bru Burger saved the day!), but the psychological confusion over whether to let loose for a day off, or get ready to go back to work the next day could not be erased even by the most exuberant of fireworks displays. Mid-week holidays are surprisingly kind of bummers.

The Week in High Opera Part 1 – The Show: Richard Wagner’s dramatic tale of The Flying Dutchman, a man cursed by the devil himself to sail the sea forever unless he finds a woman who will pledge true and undying love. He gets to come to shore every 7 years to give this a go and find true love and that’s where the Opera begins. Guess what? He finds her. They fall in love during an aria but then a misunderstanding pulls them apart, and then….and then…well, I’m not going to spoil it, but it’s a tragedy so someone dies.

The production was terrific, the third act was especially riveting. Marcy Stonikas as Senta sang beautifully, and Nathan Berg as the Flying Dutchman swaggered through with a strong bass baritone that was both intimidating and vulnerable.

The Week in High Opera Part 2 – Audience Demographics:  There was a noticeable percentage of younger people in the audience. For opera fans, the importance of a younger audience showing interest in a traditionally “old person’s” entertainment cannot be understated. They definitely seemed more engaged than the older gentleman who sat next to me and fell asleep moments into the overture. (The overture to the Flying Dutchman is one of Opera’s greatest hits.) He slept through all of Act 1, most of Act 2, and probably would have dozed through Act 3 if it wasn’t so loud and short. Opera is still by and large supported by older, wealthier, white people, some of whom are at the show to hob nob with other like minded people and not necessarily to appreciate the performance. The younger, more representative of the demographics of the City’s residents are starting to give opera some much needed appreciation and a bit of excitement and enthusiasm. 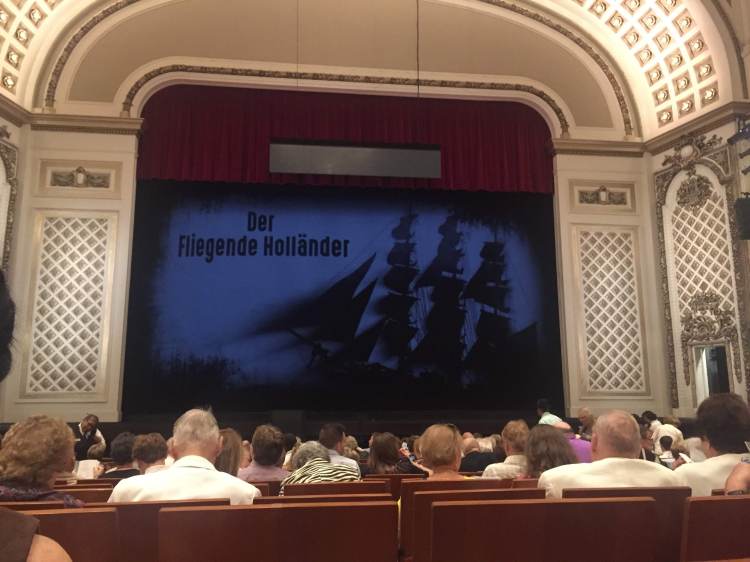 The Week in Steak Houses: If you or someone you know fetishizes 1950’s era Steak Houses, Jeff Ruby’s Steak House downtown is as immersive of an experience as you can get. Time stands still inside the restaurant where mostly male waiters (I don’t recall seeing a waitress) wear white jackets over a butcher’s apron. The service attempts to be 5-star quality, but it doesn’t quite get there. For example, I got served the same fillet all of the other women at the table ordered, but I asked for fillet mignon. They didn’t always refold napkins when people left the table, and the classic “serve from the left, remove from the right” technique for high-end table service was not practiced. However, the waitstaff was falling all over themselves to be helpful and attentive and they were. Just not as polished as what they seem to be striving for.

The steak is decent, but not the greatest. The salads are over-dressed, and you can’t order a smaller-sized side salad as one of the sides. Since all of the sides are served family style, the waiter could have suggested ordering a salad to share. He did not. The actual sides listed on the menu are old school and heavy in carbs and fat.  One potentially healthy option, roasted vegetables, was a skimpy portion poorly prepared. Like I get it, they don’t like vegetables.

There is something comforting about eating in a Jeff Ruby restaurant. For one, Mr. Ruby is an excellent corporate neighbor and I don’t mind supporting his restaurant. His menus are easy and the food is decent. His signature Freddie Salad, which is served at his other restaurants too, is a trip down memory lane. In 2018 it takes a lot of guts to serve a chop salad of all iceberg lettuce and no other vegetable, that’s over-dressed with Ranch and filled with clumps of bacon where the line cook hasn’t stirred the ingredients completely. They don’t make salads like that anymore and there’s a reason. It has to be possible to tweak the menu and still leave all the unhealthy eating habits be available to people who are still dining out like it’s 1950. There is so much more interesting food downtown though, that I guess the old-school, familiar-seeking crowd needs a place, too

Steak. Fillet. Not what I ordered, but whatever.