The Week in Adult Games: This year the tiny neighborhood of Pendleton hosted their fourth annual Danger Wheels Race. Adults, who have signed waivers (!) sit on a metal, pedal-less, Big Wheel-esque bike and two other adults push the rider down the hill. In each round obstacles like ramps are added, and the crowd is encouraged to toss water balloons at the riders as they pass. The balloons are purchased to benefit charity. The race is raced for the thrill of it. The waivers are signed for the lawyers.

The course for round one with just one little ramp near the bottom. 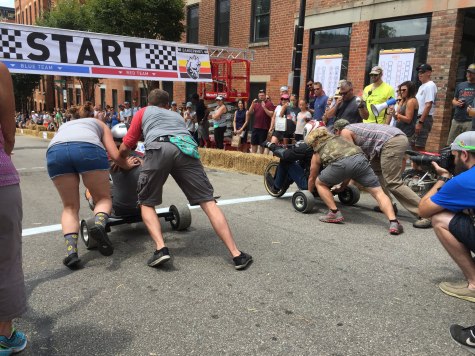 Teams push off their riders to start the race.

The Week in Re-Interpretation: This week the Cincinnati Opera presented the American premiere of Another Brick in the Wall, an Opera based on the Pink Floyd’s 1979 rock album of the same name. As an opera, the story is not traditional. Whereas classic opera is about visceral feelings of love, hate, greed, power, etc., The Wall is a psychological story with modern political undertones. A much, much younger audience than usually attends opera made up a sold out (or nearly sold out audience) and it was clear a lot of Pink Floyd fans had shown up. (I saw a man wearing a Syd Barrett t-shirt under his sports coat.) I was having a bit of trouble separating the music on stage with my brain’s pre-conceived notion of what the song “should” sound like, and having trouble with squaring what was happening on stage as an effective operatic show.

In the end, I liked it well-enough. Nathan Keoughan as Pink, was charismatic enough. Meaning he was super charismatic if this was a regular opera, and meh, because this is a rock opera. The score occasionally soared, but seemed intent on hiding the rock roots of the source material. The graphics and stage craft gave the stage a visual pop and something to look at, even though the story just wasn’t always being told in a compelling way. The real star of the show was the chorus, really providing a modern sensibility to the role of a chorus on stage and exploring new sounds.

Brick in the Wall should have been an in-your-face balls-to-wall, F-U-to-the-Man show. It wasn’t. I liked it, but it never got to me the way listening to the album did.

This Week in Food Trucks: I didn’t properly document* the chicken taco I bought and thorougly enjoyed from Tin Man Grill, but that’s just because I was distracted by their cooking technique. They are driving around backyard model “green egg” smokers and getting it done. Also, this was one of three food trucks that pulled up on my street on Thursday as part of Adult Swim for the neighborhood pool. I didn’t go to the pool event, but I did celebrate the arrival of food trucks at my doorstep!

*no picture of the food, of the menu, of anything but the truck. That is bad internetting! 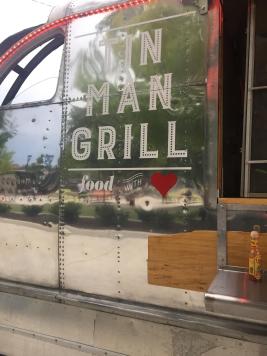 The Week in Product: Personally, I don’t give a flip about my hair. I wash it every day, comb it once in the morning, and I’m done until the next day. Then, every seven weeks or so, I go to a salon where it’s the stylists job to put as much product in my hair as possible. It’s stunning and I think my hair stands up as much from the shock of being treated so intensely as much as from the products themselves. The stylist actually used five different products, but I was only fast enough to document three.

The Week in Burgers: Last week was Burger Week in Cincinnati, but this week I had the occasion to go to Bobby Flay’s Burgers in the Jack Casino. No kidding around, the burgers are delicious and at about 9 bucks, an affordable burger option. And, that burger sits with deliciously crispy  fries and onion rings,  a decent pickle, and a well-blended, tasty chocolate shake. That is Burger heaven.