The Week In Whole Food: Fun to see recognizable food items on the street in the Hood on Sunday morning instead of the usual puke-art. I mean, there could have been some expelled food product near this ditched container, but I’d like to think the owner was just a stupid literer and not a stupid, drunk, literer.

The Week In We Beg to Disagree: My book club read National Book Award Finalist novel Disoriental by Négar Djavadi. We liked the book well enough but were dissatisfied enough to ask what made this book an award finalist. The weaving of her family’s past and her own present took some getting used to, but the parts about her family history and their experience in, and escaping from Iran are very well written. Less interesting and written less assuredly is the story of what the narrator did after her escape. A big build up toward The Event is so disappointing we thought it marred the entire book.

The reviews we read were not critical of this book at all. It seems Book Awards are designed to sell books and not to lend a critical, learned eye to what is written for the purpose of rewarding excellence and steering an audience toward it.

The Week in Gardening: Planting season doesn’t begin in Cincinnati until May 7. Clean up the yard season begins now. I own a house I’m trying to sell and I want to get the yard back to it’s pre-rental glory days. A couple hours of reclaiming the yucca garden and uncovering sunken stone edging reminded me of the satisfaction of yard work. My glutes on Sunday reminded me of the strain. At least when I work on the yard and come back home to the downtown bars I feel like I’ve earned by afternoon beer.

A daffodil and a half in the newly reclaimed yucca garden. 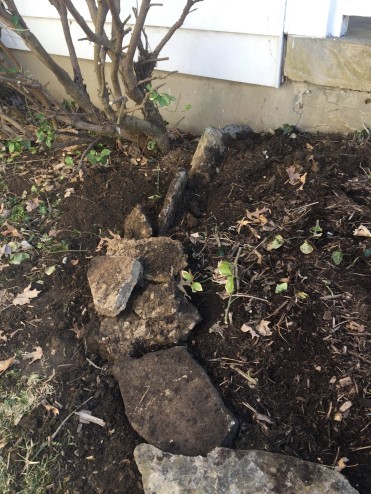 Pulling out rocks to reset the edging.

The Week in CHX:  CHX fried chicken opened around the corner from me about a month ago and I finally got in to try it. The have a super small menu, essentially chicken tenders, they call ’em bantys, on or off a sandwich or salad. Five sides. They brine the chicken, bread it and fry it. I had the tenders in the hot breading. Very tasty. The crust is thick and dark brown. The four piece came with two hush puppies. The puppies aren’t the best I’ve ever had but they are good, and since hardly anyone in Cincinnati serves Hush Puppies on a regular basis, it’s a win. The buffalo sauce I picked was fine, but the honey bbq Chick Fila packet that I put on my chicken when I brought it home tasted much better.  Which means next time I should order the CHX honey bbq sauce instead of breaking their hearts with my big corporate sauce usage.

The Week in Onions: I grocery shopped today knowing I had 4 onions at home. I only needed two onions for the two soups I was making. As far as onions, I was covered…Until I started cooking. All 4 onions had turned against me. Moldy, soft, sprouting…they had a busy week since I saw them last Sunday.

Anyway, before I could get to step one, saute the onions, I had to complete Pre-Step-One, to buy some onions. I decided to be extra nice to this bag, giving the onions a cushy ride in the passenger seat on the way home. Let hope this batch lasts till next week. 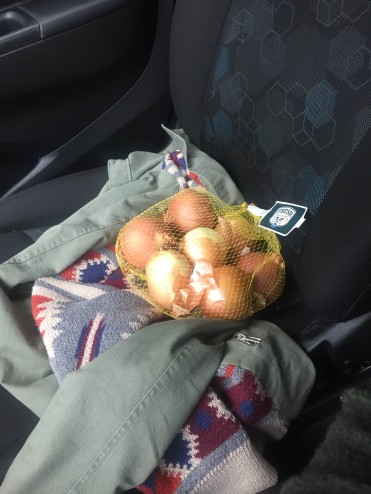 Treating the onions with respect. No seatbelt, tho.

Hey. I made soup!

A daffodil and a half in the newly reclaimed yucca garden.

Pulling out rocks to reset the edging.