The Week in Personal Goals: There is a famous book (in literary circles and such) by James Joyce called Ulysses. It was released in 1922 and it considered both one of the greatest books ever written and one of the densest, most difficult, which is why I get a lot of blank stares when I mention it. I have tried to read Ulysses a few times before and couldn’t make heads or tails out of it. And, as much as I read, and considering that I like dense books, not having read Ulysses was a blot on my reading resume.

This time, with both Spark Notes and the book open I have crossed the 1/2 way point and, get this, I pretty much understand what’s happening. Just making a note of this achievement in case I die before I finish rest assured I was murdered. I want to finish this book.

The Week in the Power of Music: This week the Cincinnati Opera shared space in three traditional black churches around Cincinnati. I saw the show at the Southern Baptist Church in Avondale, and was blown away. Three church choirs singing together filled the church with gospel standards including the thrilling “I Want to Say Thank You” and “Do Not Pass Me By.” Opera singers Luther Hezekiah Lewis and Indra Thomas performed both traditional opera and led the choirs in a couple well-known gospel tunes. And saxophonist Ed “Sax” Thomas jazzed up the place with a rousing rendition of “At Last.”

The crowd was riled up – hands in the air, clapping, standing up spontaneously, and swaying to the music. Sometimes a show just fires on all engines. This show was an absolute joy.

Also, I’m not a religious person, but I always thought I could be a Jesuit Friar (in the future world where there’s religious gender equality), but my heart would always think Baptist and the beat of the music of the Baptist church. 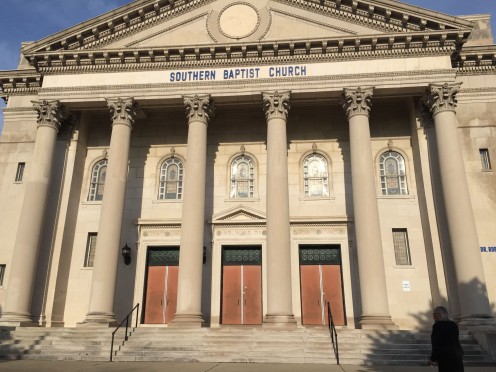 Members of the audience rising spontaneously to the music’s power

The Week In Duality: My car is mint green. I know Chevrolet made thousands of them, but they still aren’t as numerous as the black, silver, red, and white selection of cars on the road. When I passed my exact car on the highway AND I couldn’t safely look into the other car because of the way traffic was moving, I decided there was a glitch in the matrix, and, man, maybe I was in the other car. Whoa.

The Week in Lunch Meat:  I’m sure a traditional Italian producer of Mortadella, a large salami of made of pork known for being “marbled” with large cubes of pork fat, would be appalled that in the Midwest we just put it under the generic label “lunch meat.” You might hear cold cuts, or deli meat, but lunch meat is the norm. What passes under this umbrella term is highly processed meat, that is very salty, and often loaded with chemical preservatives. Lunch meat isn’t healthy, but it tastes good and it’s easy.

Those same meats can be prepared with less chemicals, of course, but those are tough to find. This week I had a Mortadella sandwich that used artisan Mortadella which, sliced thin, almost melted in my mouth. Paired with a slightly de-hydrated pineapple slice, ricotta, tomato jam, and basil, all on a sesame seed bun, my “lunch meat” was elevated to a beautiful sandwich. And it’s still lunch meat.