The Week in Rest Areas: Family trips in the 70’s were often elaborate endurance tests. My Dad did all the driving, and he liked the long haul to Florida from Cincinnati which we took in two days, stopping a cheap, motels within earshot of the highway. The highway system was just coming into its own in the 70’s and the commercial buildup we’re all used to seeing today, just wasn’t as prevalent. We would travel past exit after exit after exit that seemingly had nothing to offer. Like bathrooms.

Rest areas or rest stops where drivers could rest, were actually part of the design of the original highway system. Since restaurants and restrooms were scarce near the exits for year, rest areas provided a great service. As a kid, I loved rest areaa. Me and my brother could run around for a few minutes and if we were good, Mom and Dad might buy us a bag of Bugles.

I stopped at a rest area on my way to Minster, Ohio this week. It sits in Piqua, OH between two fairly built-up exit areas loaded with fast food and gas options. The rest area was quiet, with picnic tables and grills, and clean rest rooms. And nostalgia. I love a good stop at a rest area.

A beautiful day for a rest 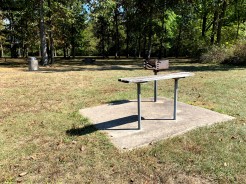 Don’t have a grill at home, Ohio has a destination for you

The Week in the Last Oktoberfest of the Season: Minster, OH is a town settled by German immigrants in the 1830’s, and those Germanic roots are still apparent and valued by the approximately 2,800 people that live there. On the first weekend of October, the town holds their Oktoberfest which draws 80,000 people. The festival is all music, beer, food, and some local crafts. And that beer is served in 1/2 milk containers to keep everyone in the German mood.

The polka bands all play the Chicken Dance, Hang on Sloopy (Ohio’s official State ‘Rock’ Song), and Sweet Caroline over and over. So good, right! I was pleased to hear one of the bands do a pretty sweet version of Teenage wasteland, with the accordion taking the keyboard trill that starts the Who’s version, and the brass section filling in where the guitars would enter. Very fun. 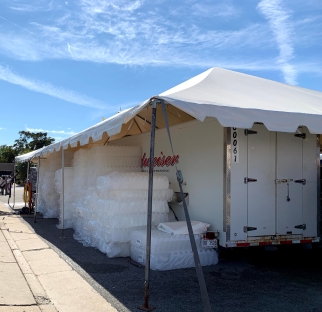 I didn’t take enough picture. Here’s one of the official Oktoberfest sign. I know. It’s a great picture. 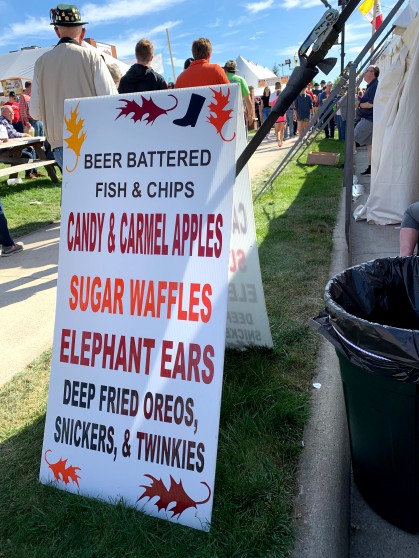 Besides Schnitzel and brats, carnival favorites filled the bellies.

The Week in New Versions of Old Songs, Continued: On Sunday I went to see Shamarr Allen at MOTR. Allen leads the four piece band on vocals and with his pocket trumpet. The band, hailing from New Orleans, played to the crowd of 30 like it was a packed house. They got us movin’ and groovin’ and singin’ along. The highlight for me was his unbelievable version of Nirvana’s Smells Like Teen Spirit. A surprise musical choice that Allen pulled off beautifully.

Beer in a Wine Glass