The Week in Not So Foreign Objects: The Pony Coney, served only on Wednesday at Pony OTR, is a full size dog on a full sized bun topped with house made chili, onions, mustard and cheese – a One-off DIY of what the chili parlors around town serve. It’s delicious (even though I forgot to order the spicy option with jalapenos which would have added some zing.)

Instead of zing, I got some weird mouth-feel, little pieces of something in my mouth that weren’t quite chew-able. I just assumed the Pony ground their own meat for the chili and I was getting itty-bitty bone or cartridge. But then I pull a large piece of this substance out of my mouth and did that thing where you clean it off like you think you’ve uncovered a buried treasure. It looked like plastic.

I called the bartender over, and she took it out of my hand as I was telling her that I’d just pulled that out of my mouth. Not concerned, she took to analyzing the sample. She scratched it, pulled on it, and finally, smelled it. We determined it was the outer-outer skin of an onion. I felt better about both the “substance” and my Bartender’s inner fortitude.

The Week In American Classical Music: This week’s CSO program brought in Guest Conductor Thomas Wilkins leading the orchestra in 5 pieces written by African American composers. With music stemming from the Harlem Renaissance to present day, Wilkins noted the audience would get a taste of many different sounds and emotions that aren’t always represented in the typical classical music canon.

He was correct. And the audience, often, in my opinion, not thrilled by an evening of unfamiliar music was easily swayed mid-way through the first piece. Each work was met with enthusiasm. When the final piece, the exuberant Harlem, performed with enlarged horn and sax sections ended, the audience jumped to their feet. Listen to these works:

The Week in Chatting: The lady I sat next to at the CSO told me I wasn’t the regular person who sat in that seat, but we still had a lovely chat. As we waited for the show to start, and in between pieces, she kept pulling out her phone to check the UC football score. Turns out she’s a retired Organic Chemistry professor from the University. I asked her how she became interested in classical music. She got a little misty and told me her husband introduced her to it, but she said, as her voice faded a bit, “I lost him a few years ago. But,” and she regained her voice, “I always feel he is here with me.” Me too, I gotta say.

She also said she was impressed a “young person” like myself would attend the symphony. I played along. And, of course, 54 years old is young for the symphony crowd.

The Week in Fancy: Happy Hour at Crown Republic brought me chicken Gobbets which are fancy chicken nuggets and Apple toast which is toast gussied up with baked apples, bacon, and bleu cheese (on a pesto painted plate…oooh la la). Probably my most adult Nuggets and Toast dinner ever. 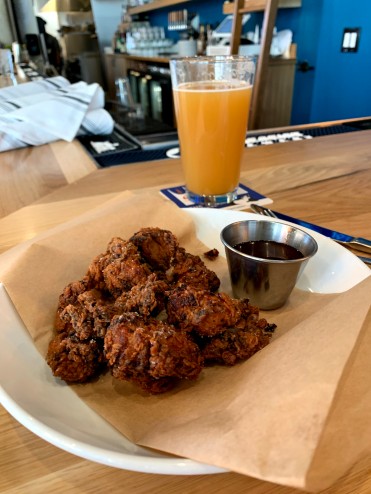 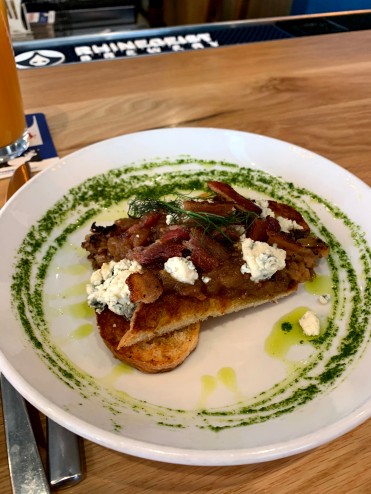 Gobs of stuff on Toast