The Week in I’m Back: Last week I took a couple days off for a low-key vacation, and this week I returned to the office. An old co-worker of mine deduced that every time I returned to work after a long weekend, I always seemed angry. SEEMED!!! LOL! She had my number.

Anyway, because I took her observation as a opportunity for personal growth, on my last day before my long weekend at my new job, I warned my new co-workers that I would probably be surly upon my return. I decided “surly” was a more pleasing, less threatening word for my impending emotional display.

And sure enough, my arrival on Tuesday did not disappoint. In my absence someone sat at my desk, removed my seat cushion, moved my keyboard and pens, and did small array of things I spent the day mumbling under my breath about. C’mon, man! How could I not be surly? Also, since I’m very peaceable on the other days, I use the pent up fired up emotions to get shit done. I did not waste the energy.

The Week in Missed Connections: For a couple weeks at the end of Covid Confinement, during my daily walks, I always seemed to run into a young couple walking their golden retriever. The couple was super good looking, and their well-groomed dog seemed to recognize their beauty and had a very proud walk, like, “Look at my beautiful people. I’m the luckiest dog in the world.” Anyway, I saw them (too) frequently on my evening walks AND my morning walks. I saw them even when I changed up my usual routine to avoid them. When I got a new job and a new morning walk time, they were walking then, too. The times when we passed close enough to each other to require some level of communication, they were cordial, but not terribly friendly and, not that I’m ranking them (but I AM ranking them), they didn’t add value to my walk like other neighbors do.

A week or so ago I’d had changed my walk time to avoid yet there they were on the corner. “It’s weird the way we run into each other,” I said. Well, I don’t know what happened, but I haven’t seen them since. My window faces the park and I’ve not even  seen them randomly. Their disappearance, as sudden as their appearance has me wondering if I conjured them up. Where did they go?

Side note: Apparently they were waiting outside for me to write this because when I got up to stretch they were in the park in my line of sight. I think I should cue up some creepy music.

The Week in Recipe Wrangling: A Facebook friend posted a NY Times article, What Your Recipe Box Says About You, by Joyce Purnick, because, like the author, my friend and several commenters on her Facebook post, have a love/hate relationship with how they love the recipes they’ve collected, but lament that their recipe collections aren’t as organized or tidy as they would hope.

Even though I often cook with my friends, I rarely see their  recipe collections., though I love it when I do. When I do see the binder/box/drawer/folder where the culinary secrets of the house are kept, they are almost always a disordered mess, a mess everyone means to clean up one day. Recipe collections are functional and messy in the way junk drawers and toolboxes are. These are places you don’t necessarily linger over. You might stop for a moment if something catches your eye, but generally, you get what you need and move on.

It is my personality that I have a very bifurcated collection. On one hand, I have my green recipe box which is alphabetized and color-coded. It’s mentioned in my will at the request of a friend who will be it’s receiver upon my demise. That beauty also comes with the binder and folder and a magazine holder of recipes that are printed in some kind of format that I can’t tame down to index cards that will fit the fancy part of the collection. These recipes just smushed in. I allow both sets to live in harmony and love them both equally. 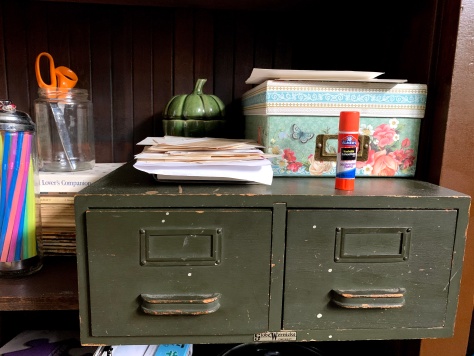 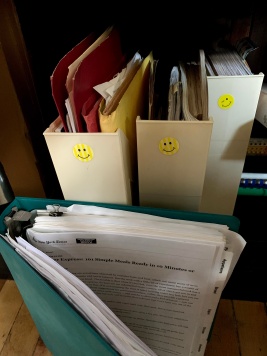 The Week in Processing tomatoes:  My co-worker gave me several pounds of what her CSA called “processing tomatoes.” It was a bag of ugly, blemished tomatoes that needed to be cooked into a sauce. This week I processed (verb) the processing tomatoes (Adjective) into tomato sauce and then made a simple pasta/mushroom/sausage bake. My process (noun) in creating it was to throw everything in a baking dish and hope for the best. It worked. And, I got to use my chinois sieve in the process! 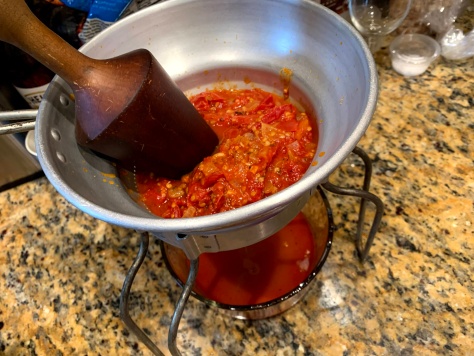 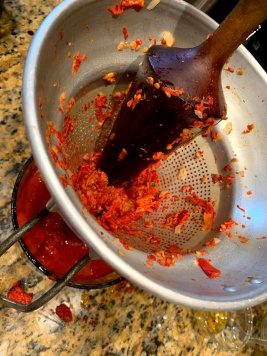 The Week in Split Images: Saw the two images below within hours of each other, within block of each other. The highs and lows of living downtown and as close to either subject as I was willing to get. 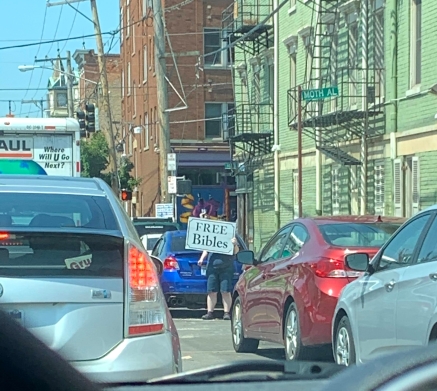 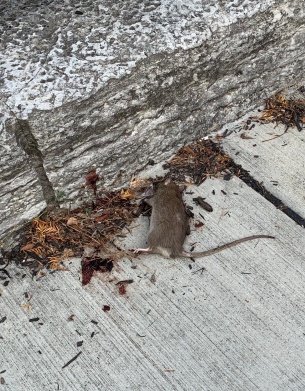